A university-wide webinar on the topic of 'Blackboard Collaborate Ultra' was held by FLT E-Learning Supervisor, Mohsin Raza Khan, on Thursday, August 22, 2019, under the supervision of Training Manager at the Deanship of E-Learning, Mohammed Jarallah. In attendance were faculty members from various colleges and locales. Mr. Khan provided some basic instruction for those who were not familiar with King Khalid University's learning management system, Blackboard. Mr. Khan then conducted a training session in which he focused on Blackboard Collaborate Ultra. "Blackboard Collaborate Ultra is a real-time video conferencing tool that allows users to add files, share applications, and use a virtual whiteboard to interact with participants. King Khalid University selected this user-friendly tool that runs in a browser and does not require Java to be installed to help support our students with a world-class communication solution."

The main goal of the webinar was designed to give participants a quick tour of all the essential features and controls in the user interface. In doing so, participants will effectively be able to improve student learning, engagement, and interaction.

The Deanship of E-Learning in cooperation with the Faculty of Languages and Translation is expanding its educational resources to serve more members of the community and is committed to continuous improvement in all academic programs. E-learning is a vital component of both objectives and an essential educational development tool at the university and other educational institutions throughout the Kingdom. 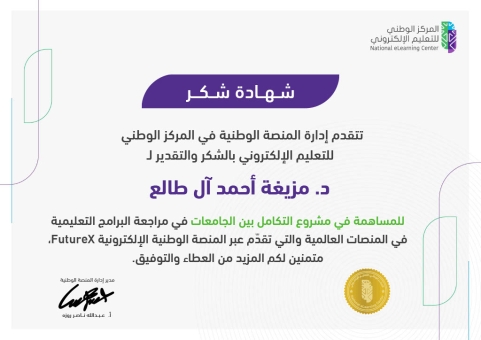 Faculty Member Receives Certificate of Appreciation From the National eLearning Center
In November 2021, Dr. Mazeegha Al-Tale' received a certificate of appreciation from the National eLearning Center (NELC) for reviewing a FutureX learning management system course as part of NELC's ASAS initiative. FutureX, which launched in late October 2021, connects institutions throughout the Kingdom together to support the human capital development objectives of Vision 2030. "It was an honor to be selected as a course reviewer for material appropriateness. While many MOOCs focus on getting knowledge out to as many people as possible, FutureX wants to make sure the knowledge is also useable. EdX, Coursera, and FutureLearn are some of the more well-known partners working with FutureX, and we fully expect an improvement in human capital development through online learning," said Dr. Al-Tale'. Date: 12/24/2021 Source: Faculty of Languages and Translation 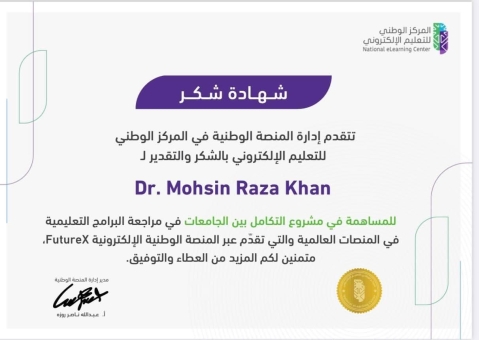 Faculty Member Receives Certificate of Appreciation From the National eLearning Center
In November 2021, Mohsin Raza Khan received a certificate of appreciation from the National eLearning Center (NELC) for reviewing a FutureX learning management system course as part of NELC's ASAS initiative. FutureX, which launched in late October 2021, connects institutions throughout the Kingdom together to support the human capital development objectives of Vision 2030. "FutureX and the ASAS initiative have several interesting plans in place. In my role as a course reviewer, I leveraged my experience as a QM master reviewer to ensure best practices were found in the MOOC I reviewed. Many of the fundamental best practices and areas reviewed are also based on the E-Learning Practitioner course that is run by the Deanship of E-Learning on an annual basis," said Mohsin.   Of noteworthy mention, Mohsin also led the E-Learning practitioner certification course in November 2021, which is implemented on an annual basis by the Deanship of E-Learning. In that course, dozens of participants throughout King Khalid University learned how to improve student engagement, interaction, and quality learning. These objectives were solidified by the core foundation of the program that participants would be able to: Create content items to present a variety of learning activities to enhance student learning. Deliver authentic assessments to evaluate student knowledge in a variety of meaningful ways. Use Blackboard communication tools to promote interactions between the student and instructor, the student and course content, and the student and peers. Effectively utilize Blackboard Collaborate™ tools to increase student engagement by providing a means to share and create knowledge. Date: 12/24/2021 Source: Faculty of Languages and Translation

Obituary: Dr. Ahlullah Siddiqui
Dr. Ahlullah Siddiqui S/O Mohammad Urwatullah Siddiqui was born on February 24, 1973, to a noble and humble family in Allahabad, UP, India. He died of cardiac arrest on December 9, 2021, in Abha, KSA, at the age of 48 years. He is survived by his wife, three daughters, and a son. His eldest child is a 17-year-old daughter, and all his kids are schoolgoers. Dr. Siddiqui obtained his primary, secondary, and university education from reputed institutions. Since his school days, he was found to be a possessor of certain distinctive traits uncommon among his classmates. He was not only sound academically, but he exhibited all his potentials in extracurricular activities also.   Dr. Ahlullah Siddiqui did his masters in linguistics and literature, M.Phil in English Literature, and a Ph.D. in Sociolinguistics. He also had the opportunity to join as a Fulbright scholar in the Professional Development Programme for English lecturers at the University of California, Los Angeles, and Washington D.C.   Dr. Siddiqui has worked in several capacities from time to time. He started his teaching career by teaching English language and literature to adult learners, under the National Open Schooling Program, Delhi, from 1999 to 2004. He also taught English language and literature to pre-university students, at a historical college, under the government of Delhi from 2004 to 2008.   He joined King Khalid University Abha, KSA, in October 2008. Since then, he taught English as a foreign language at the undergraduate level till his death with zeal and zest in the Department of English, Faculty of Languages and Translation. He also served as a coordinator for the English Language Center, King Khalid University Abha, KSA.   Dr. Siddiqui has to his credit, several research articles published in renowned journals covering various themes related to linguistics and literature. He has actively attended several conferences and seminars and has presented quite a good number of research papers related to his specialization.   It was his positive disposition, his reflective ways of operating, and all of the character traits that made him so special. Dr. Siddiqui’s questions never went unanswered. It was his humble and amicable nature that made him look different from his contemporaries.   It is indeed the hardest thing to forget someone who means the world to you. Forgetting a friend like him is like forgetting our own soul – it is just not possible! His sudden disappearance has created a vacuum among us. He will be remembered with warm thoughts and memories.   Having him with us was having great support, a great colleague, a caring brother, and a loving father. Date: 12/17/2021 Source: Faculty of Languages and Translation

Aligning Course Learning Outcomes
On November 29, 2021, Dr. Mazeegha Al-Tale' led a training webinar for undergraduate and graduate programs in the Faculty of Languages and Translation titled 'Designing CLOS for EFL Courses'. In attendance were around 35 course coordinators and instructors from numerous campuses.   Dr. Al-Tale' began the webinar by explaining the benefits of course learning outcomes (CLOs) to both teachers and students. She stressed the need for teachers to ensure the consistency and alignment of outcomes, materials, methods, and activities because that will help students learn more effectively.   When going through the difference between objectives and outcomes, she explained that course objectives describe an intended state and is more general and open to more than one interpretation. Dr. Al-Tale' then mentioned that learning outcomes are specific and not open to more than one interpretation. "There are 7 characteristics of writing good CLOs. They should be topic-related, domain-related, measurable, specific, concise, clear, and aligned," she said. She then showed the 4 criteria to consider when writing CLOs, stressing CLOs need to be aligned with program learning outcomes, course objectives, content, teaching methods, teaching activities, and assessment tools. At the conclusion of her presentation, there was a lively question and answer session where participants had the opportunity to discuss course learning outcomes and how they align. Please click here to view a recording of the event. Date: 11/29/2021 Source: Faculty of Languages and Translation

Writing S.M.A.R.T Course Learning Outcomes
On November 27, 2021, Dr. Abdulwahid Al Zumor led a training webinar for undergraduate and graduate programs in the Faculty of Languages and Translation titled 'Course Learning Outcomes'. In attendance were around 55 course coordinators and instructors from numerous campuses.   Dr. Al Zumor began the webinar by explaining that course learning outcomes (CLOs) are the brain and heart of the course specification. He stressed the need to utilize the models provided in level 6 of the NQF-KSA because it acts as a key nexus that reinforces and consolidates relationships between education and training on the one hand and the practical and realistic requirements of the labor market on the other. When going through the knowledge/understanding, skills, and values learning domains, he related that values also include autonomy and responsibility. "Effective learning outcomes are student-centered, measurable, concise, meaningful, achievable, and outcome-based," he said. He then showed examples of both well-written and poorly constructed CLOs, emphasizing the importance of quantifiable CLOs, whether direct or indirect. At the conclusion of his presentation, there was a call to action to write the main course objective from the instructor's perspective and to have a variety of assessments. Please click here to view a recording of the event. Date: 11/27/2021 Source: Faculty of Languages and Translation