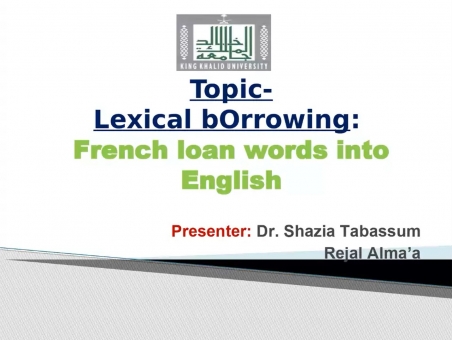 At a webinar organized by the Language Research Center on March 10, 2021, Dr. Shazia Tabassum spoke about Lexical Borrowing: French Loan Words into English. The presentation was all about how the English Language has so far been enriched with lexis from other languages.

Dr. Shazia, first, started her presentation stating an intriguing fact that English is not a pure language in terms of lexicon, but a heterogeneous one. This particular phenomenon is because of its exposure to frequent cultural changes over ages. The English language is composed of words from different languages across the world, she added. As a result, many of the everyday words used in spoken and written English have been adopted from other countries in which the first language is not English, she highlighted. She quoted David Crystal who termed English as an “insatiable borrower”.

Dr. Shazia spoke about foreign invasions, wars, foreign trade and travel that resulted in such lexical borrowing. Most of the English lexical items have been taken from Greek, Latin, and French she added. She also mentioned some other donor languages such as Chinese, Arabic, Turkish, Hindi, and Urdu. The interesting point is that 70% of the modern English words have been all borrowed from other languages, and French is the major donor language, she said.

She showed the similarities and differences between English words and the main donor language French. She exemplified gender for inanimate things in French. She gave some more examples of French load words and phrases that are frequently used in English.

The webinar was a great success with the active participation of the faculty members, PhD and MA students.

Top Students Honed Language Skills in First Online Summer Program
Under the supervision of Dean Abdullah Al-Melhi, the 2021 Online Summer Language Program (OSLP) titled "English Across Cultures and Intercultural Awareness" ended on 19 August 2021. OSLP is a four-week, intensive program in language study designed specifically for the curriculum in applied linguistics taught with a focus on intercultural awareness and different models of teaching and learning English. OSLP, much like our summer language program at Swansea University in 2019, was designed as an in-person, intensive language program, but due to the COVID-19 pandemic, OSLP ran synchronously online for the first time.   The OSLP team, led by Vice Dean for Academic Development & Quality, Dr. Abdulrahman Almosa, Chairman, Dr. Munassir Alhamami, and E-Learning Supervisor, Mohsin Raza Khan, sprung into action to co-develop — along with the team at Monash University — a fully online four-week summer language program for 63 of the best and brightest male and female students students in the Bachelor of Arts in English program.   Dr. Almosa noted, "This was the first time we held an online summer language program in cooperation with a leading international university. There were several technological and pedagogical challenges in developing an effective program that incorporates a social and cultural immersion experience that our students would get in person. Most of the modules were designed around language and culture concepts and instructional design, which are at the heart of recent developments in applied linguistics and related fields. I am pleased to report that our program was a success and among the first of its kind in the Kingdom of Saudi Arabia. I sincerely thank Dr. Nizar Farjou, Dr. Raqib Chowdhury, Dr. Ruth Fielding, Susan Davis, Dr. Anna Podorova, Dr. Libby Tudball, Dr. Melissa Barnes, Dr. Dat Bao, Dr. Amber McLeod, and Ouahiba Zarzi at Monash University for their diligent collaboration and effort to make our joint program successful."   In his closing remarks, Dean Al-Melhi congratulated the students involved in the joint program and expressed his appreciation to all participating faculty members at Monash University and the Faculty of Languages and Translation at King Khalid University. The Bachelor of Arts in English program is committed to providing students with additional activities for their professional development, consistent with the intended learning outcomes and labor market developments. Date: 9/3/2021 Source: Faculty of Languages and Translation

FLT Participates in Mobaderoon 2
On 29 June 2021, Hassan Costello delivered a 2-hour webinar titled "Strategies for IELTS Preparation and Test-Taking". Under the supervision of the Vice Presidency of Business and Knowledge Economy, the webinar was organized by the Scholarship Administration and Faculty of Languages and Translation as part of Mobaderoon 2, a community service initiative focused on furthering the development of knowledge exchange between King Khalid University and the community. In the webinar, Costello explained to nearly 250 participants that there are plenty of decent study guides on the market, but his goal was to provide practical strategies that can be used to exploit weaknesses in the test itself and avoid the most common errors when taking the IELTS."Each tip was carefully selected for its effectiveness. Strive to become an expert in learning what works well and what can be done in order to improve," he said.   The Bachelor of Arts in English program at the Faculty of Languages and Translation is committed to participating in community partnership activities as part of its role in the community partnership plan at King Khalid University. Date: 7/9/2021 Source Faculty of Languages and Translation

Brewing for Success: FLT Alumni Entrepreneur Brings Popular Brand to Asir
Mubarak Saeed Al-Qahtani, class of 2021 graduate, has wanted to own a business since his freshman year in the Bachelor of Arts in English program, and that dream has become a reality. Al-Qahtani has brought an Al-Qassim touch to the Asir region with several drive-through coffee shops.   "College and coffee are a perfect match, and Kyan Cafe is no exception," said Al-Qahtani. While sitting in the King Khalid University parking lot before an exam, Al-Qahtani began to notice several rearview mirror air fresheners with the Kyan Cafe logo on it written English and the rest is history. He immediately began to research the brand and asked a few of his instructors in the Bachelor of Arts in English program what they thought about him becoming an entrepreneur. After receiving words of encouragement, he immediately formulated his idea, which revolved around quality, speed and convenience. Al-Qahtani credited much of his success in the operational side of the business to being able to use the language skills he picked up in the Bachelor of Arts in English program, which improved his ability to understand when to speak or write, who to deliver the message to, and what to say and how to say it. "I can honestly say that graduating with a degree in English has helped to use Foodics, which is the point of sales system we use. My dream is to launch new innovative ideas in cooperation with international companies and become a franchisor. I encourage all of the students from our program to contact some of the startup accelerators we have in Saudi Arabia to pitch their business ideas and obtain funding. There are some in Riyadh, Jeddah, and we have one in Asir," he said   The Bachelor of Arts in English program is dedicating to fulfilling its role in developing entrepreneurial leaders with the language competence necessary to take advantage of the new economic realities of the Kingdom of Saudi Arabia by inculcating creativity and innovation in the learning process. Date: 6/28/2021 Source: Faculty of Languages and Translation

Faculty Member Writes Book Chapter About Translators Training
Dr. Eyhab Abdulrazak Bader Eddin, Assistant Professor of Translation, has written a chapter for a book entitled "Research Into Translation and Training in Arab Academic Institutions". The book will be published by Routledge on July 30, 2021. Dr. Bader Eddin's chapter is entitled "Insights into Translators Training: Issues and Methods of Assessment". As explained in the book description, the book "addresses translators' status, roles, and structures. It also provides Arab perspectives on translation and translation training, written by scholars representing academic institutions across the Arab world. Themes in this collection include training terminologists on managing, promoting and marketing terms; corpora and translation teaching in the Arab world; use of translation technologies; translators training and translators' methodologies and assessment of translators' competence; research on translator training; and the status quo of undergraduate translation programs in a sample of five Arab universities. A valuable resource for students, professionals and scholars of Arabic translation and interpreting." Date: 6/8/2021 Source: Faculty of Languages and Translation

Faculty Member Delivers Session on Annotated Translation
Dr. Eyhab Bader Eddin has undertaken a fresh initiative for bringing "Annotated Translation" to light. Annotated Translation is a fascinating yet complex subject that has increasingly come to prominence and gained currency for being adopted as a major assessment method for Translation students in both undergraduate and graduate programs. Although a firm dividing line could be drawn between 'annotated translation' and 'translation commentary', they both have been used interchangeably in his session open to the public during the Spring 2021 semester. Dr. Bader Eddin delivered a 2-hour-long session — titled "Annotated Translation: Showing students the ropes — on the fundamentals of the subject", drawing attendees' attention to the seminal book, which was the first of its kind, fully devoted in a book-size work to this subject. Viz. Sewell's 2002 (Translation Commentary: The Art revisited). The session tackled such points as definition, How should an annotated translation look like? What should it include and exclude, desirable and undesirable features, marking criteria for translation commentary, steps to initiate a translation annotation project, and some illustrative practical examples. Some tangible examples have been offered to link theory to practice, as a rarely distinguished feature in translation. The session was followed by some assignments to ensure the attendees had grasped the content of the session.   To view all webinars, please click here. Date: 5/6/2021 Source: Faculty of Languages and Translation Date: 5/6/2021 Source: Faculty of Languages and Translation