Translation of Metaphors, Metonymy, and Similies in the Holy Quran 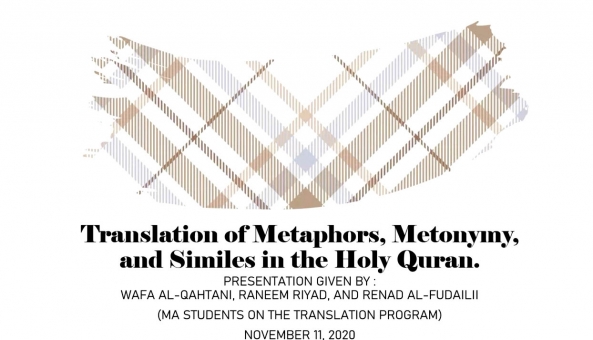 Second-year Translation students, Wafa Al-Qahtani, Raneem Riyad, and Renad Al-Fudailii, delivered a webinar titled: "Translation of Metaphors, Metonymy, and Similes in the Holy Quran" at a regular biweekly event organized by the Language Research Center (LRC) on November 11, 2020. LRC Director, Dr. Ismail Alrefaai, and Dr. Eyhab Bader Eddin MCIL CL MITI sincerely thanked the students for their participation, which allowed for a better understanding of the challenges involved in rendering the sacred text into English, as the classical Arabic in which it is written is lexically complex with unique linguistic features.

The presenters highlighted the significance of how challenging it is for translators to translate the Quran's rhetorical features or tropes. The presentation was centered on three kinds of tropes – Metonymy, Simile and Metaphor.

Wafa began her part by talking about Metonymy, explaining its etymological background with some relevant examples. Metonymy, she added, is a critical figure of speech, which significantly plays an important role in expressing the accurate meaning of particular messages in the Holy Quran. She explained in detail the role of Metonymy in the Holy Quran by comparing different examples of Quranic translation. The examples conspicuously highlighted the extent to which translators maintained Metonymy in translating the Quranic verses.

Raneem focused on how to translate Simile in the Holy Quran. She first defined the term etymologically and explained in detail with an example. Simile, she explained, is a figure of speech in which one thing is likened to another in such a way as to clarify and enhance an image. While comparing two versions of Quranic translation, she highlighted ambiguity in using a word that may confuse English readers or non-native Arabic speakers. She also focused on how the actual meaning is lost or not adequately expressed in such translation.

Renad's part was centered on Metaphors. She defined the term with an example. Metaphors, she said, is a figure of speech in which one thing is described in terms of another. While comparing two versions of Quranic translation, she pointed out the metaphorically more accurate version that conveys proper metaphorical sense.

The presenters came up with the conclusion that translating the Holy Quran involves tremendous challenges. The difficulty increases in the case of translating a sacred book like the Holy Quran as it needs an honest transfer of meaning. Also, the fact that many Arabic words do not have exact English equivalents makes translation even more challenging. It was undoubtedly a very informative webinar, garnering the active participation of both male and female faculty members and students alike.

The Master of Arts in Translation program at the Faculty of Languages and Translation is committed to providing student-centered professional development activities that are consistent with program learning outcomes and labor market developments.

Accreditation Team Celebrates Full NCAAA Accreditation
On Monday, March 28, 2022, the accreditation team celebrated news of the Bachelor of Arts in English Program, one of the leading programs at King Khalid University, being awarded full accreditation for the first time by the Education and Training Evaluation Commission, represented by the National Center for Academic Accreditation and Evaluation (NCAAA) for 7 years beginning in the first quarter of 2022.   The new accomplishment cements BAEP's position as a prestigious language and translation program offering an excellent quality of education centered on preparing students to be future leaders in the fields of English language studies and translation and contributing to the overall development and economic growth of the Kingdom.   "We are grateful to the entire senior leadership team of King Khalid University at the level of the president, vice president, vice rectors, and deanships. Without their support, this achievement would not be possible. We would also like to thank all internal quality consultants, whose dedication to the program and enthusiasm for its success made this possible. Finally, we thank all faculty members and staff who worked together to accomplish this feat. We strive to uphold the highest standards in teaching, learning, research, student support, curricula, learning resources and community service. This is an accomplishment for all of us," said Dr. Abdullah Al-Melhi, Dean of the Faculty of Languages and Translation.   "I want to express my tremendous gratitude to the quality team for their tireless efforts. Working day and night, their efforts have helped us continuously improve our quality assurance system. It was not an easy task for all of us, and now it is time to celebrate," said Vice Dean for Quality and Development, Dr. Abdulrahman Almosa. He then congratulated all faculty and staff and mentioned that BAEP is aligned with Vision 2030 and the Aseer Strategic Plan in that we aim to graduate students who can contribute positively to the national economy and development being witnessed on all levels all across the Kingdom, especially the Asir region. Date: 3/30/2022 Source: Faculty of Languages and Translation