Faculty of Languages and Translation

Ahmad Al Otaibi is a student at the Faculty of Languages and Translation, and he is a journalist at Aseer News. Lately, due to his continues press and social media coverage for the Abha Charity Association and as a representative of Aseer News, he received an appreciation certificate from the Governor of the Asir Region, HRH Prince Faisal bin Khalid bin Abdulaziz. "Ahmad sets an example of how a college student can actively contribute to the community while continuously striving for academic success," said Dr. Abdullah Al Melhi, FLT Dean. It is worth mentioning that Ahmad is also an active member in many activities as Vice President of the English Club. Date: 8/17/2017 Source: Abdullah Omar (KKU IT)
English
Fall 2017
King Khalid University
Faculty of Languages and Translation
Bachelor of Arts in English Program
Journalism
Award
Student
English Club
Asir Governor
Emirate of Asir Region
A university-wide Blackboard training webinar was held by E-Learning Supervisor at the Faculty of Languages & Translation, Mohsin Khan, on Sunday, December 11, 2016. The webinar was organized by the E-Learning Deanship. It took place as part of a university-wide strategy to increase the amount of instructional design training to enhance the virtual learning environment for both students and teachers alike. The primary objectives of the webinar were to improve student learning, engagement, interaction, and most importantly quality learning. These objectives were solidified by the core foundation of the program that participants would be expected to be able to:   Create content items to present a variety of learning activities to enhance student learning; Deliver authentic assessments to evaluate student knowledge in a variety of meaningful ways; Effectively utilize select collaboration tools to increase student engagement by providing a means to share and create knowledge.   The webinar was an overall success and will continue successively in future webinars as a part of the Tamkeen Team efforts. Special thanks to E-learning Deanship Training Manager, Mohammed Jarallah, and ELC General Coordinator, Javed Ahmad, for their holistic support.   Update: Mr. Mohsin Raza Khan received a certificate of appreciation for his efforts at the beginning of the Spring 2017 Semester. The certificate was presented to Mr. Khan by the E-Learning Deanship.   Date: 12/11/16 Source: Faculty of Languages and Translation Multimedia Contribution: Javed Ahmad
English
Tamkeen
E-Learning
Blackboard
Faculty of Languages and Translation
VLE
LMS

Dr. Fahad Otaif, Vice Dean of Academic Development and Quality, presented his paper at a seminar organized by the Language Research Center of King Khalid University held on February 15, 2016. His presentation was titled Metaphorical Framing of Media Discourse and the Representation of the Other: A Corpus-based Critical Discourse Analysis of Metaphors in the Press Discourse.  He states in his abstract,  “This paper addresses the metaphorical framing of a particular news event in media discourse, i.e. the British press and BBC news website, and how it contributes to the overall lexical and intertextual cohesion of a discourse topic as well as the representation of the other.” (Otaif, F. 2016) He primarily highlighted Media Discourse in which he showed how metaphors play a significant role in media discourse. He pinpointed the fact that metaphors have long been undermined or neglected in the field of discourse analysis. He particularly pointed out the lack of investigation into the use of metaphors in discourse as a form of cross-cultural communication that represents social minorities in Britain.  During his presentation, he talked about an interesting phenomenon in discourse–intertextuality. Dr. Otaif, while explaining intertextuality in discourse, showed how metaphors could limit understanding and perception. Dr. Otaif, while explaining intertextuality in discourse, demonstrated how metaphors could limit understanding and perception.       The seminar was very informative, interactive and overall successful. Date: 2/15/2016 Source: MD Adil Multimedia Contribution: MD Sirajul Islam
English
King Khalid University
Faculty of Languages and Translation
Bachelor of Arts in English Program
Standard 2
Standard 5
Critical Discourse Analysis
Press Discourse
Language Research Center
Metaphorical Framing
Metaphor 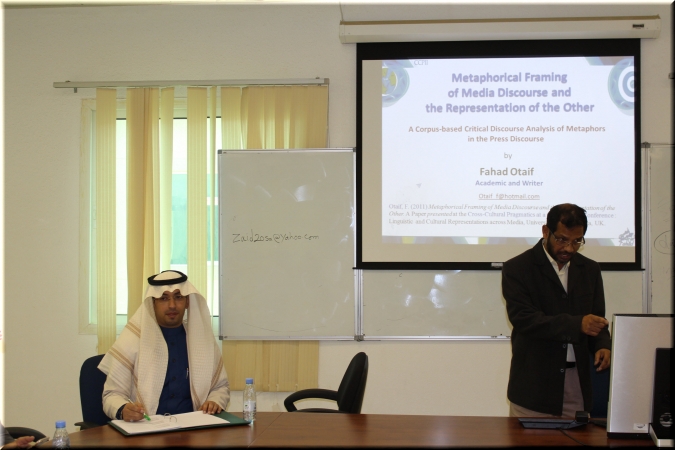 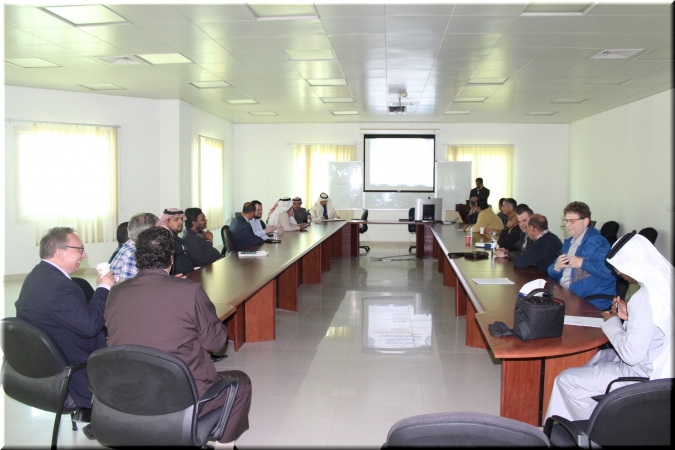 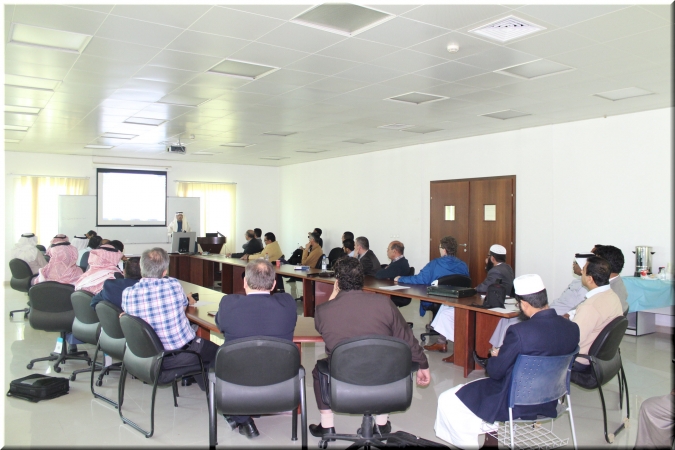 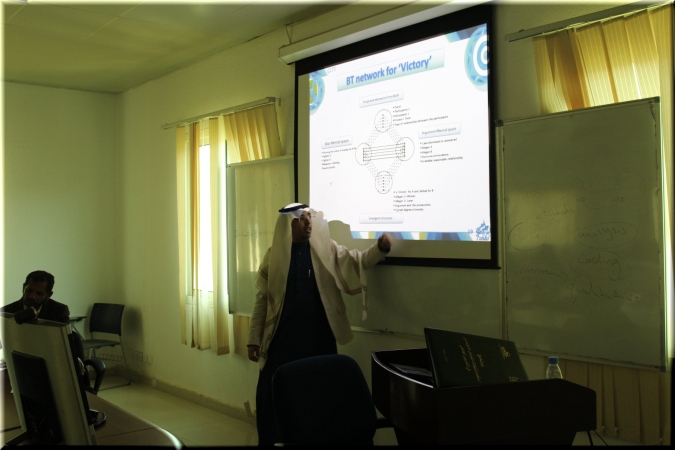 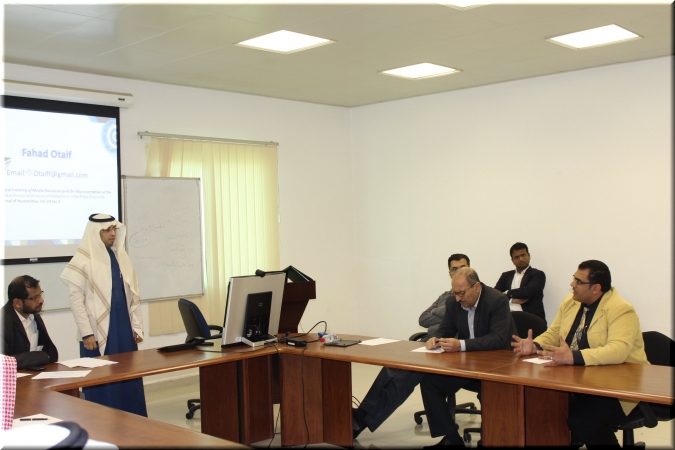 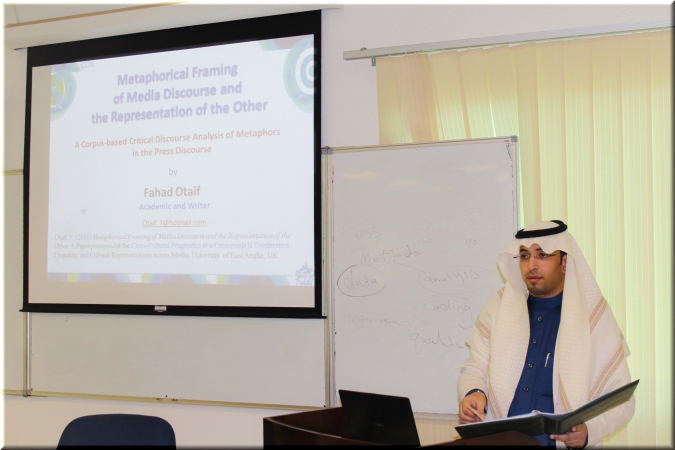 On January 26-27, 2016, four members of the Faculty of Languages and Translation traveled to the city of Tharban, Al Majardah Province, to conduct an exciting and motivationally based English language seminar to teachers of the Mohaiyl region.  On the first day, Dean, Dr. Abdullah Al Melhi made a presentation on, The Schema Theory of Reading.  He talked about the three different models of reading and how they apply to current school curricula. Dr. Eyhab A. Bader Eddin followed him. Dr. Eyhab talked about Mother Tongue Influence on  Second Language Acquisition and Use. It revolved around the influence of L1 structures on L2 in the process of acquiring L2 (both positive and negative transfer). On the second day, Mr. Faruk Haji and Mr. Matthew Paul attended the event. Mr. Faruk discussed the Use of Social Media in the Classroom.  He described how to set up a Facebook account geared toward classroom use which included homework and testing. Matthew followed him and talked about Using Popular Video Games to Motivate Students to Learn English.  His talk used the game "Minecraft" as an example of a popular video game that teachers could reference to make English study more "interesting" to students.  All sessions were followed by a question and answer period.  Overall, it was an incredible experience for the participants and a great chance to share expertise with local teachers. Date: 1/27/15 Source: Faculty of Languages and Translation
English
King Khalid University
Faculty of Languages and Translation
Community Service
Bachelor of Arts in English Program

Abdullah Omar, FLT graduate, and an ongoing student in the MA program in Applied Linguistics was recently awarded a Certificate of excellent achievement in English and First Class Honors. Abdullah received the Certificate during a University ceremony that honored students from the many different fields of academic specialization in both the undergraduate and graduate programs. The Certificate was presented to Abdullah by His Royal Highness (HRH) Prince Faisal Bin Khalid Bin Abdulaziz, the Governor of Asir Region. Abdullah had the exclusive chance of meeting HRH, and receiving congratulations for his academic achievement. He also had the honor of receiving congratulations from the President of the University, Professor Abdulrahman Bin Hamad Al Dawood. Abdullah expressed gratitude to all of his teachers and friends, and especially to his mother, for their constant support and encouragement. He wished the best of luck to all students in the English Department, reminding them of how steady, focused work and commitment are the keys to achieving their goals. Date: Spring 2015 Source: Faculty of Languages and Translation
English
King Khalid University
Faculty of Languages and Translation
Alumni Unit
Bachelor of Arts in English Program 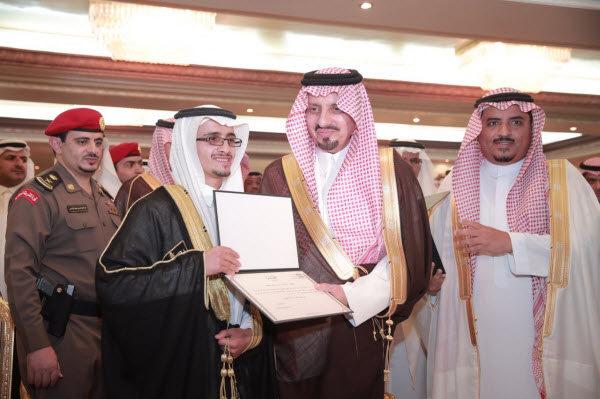 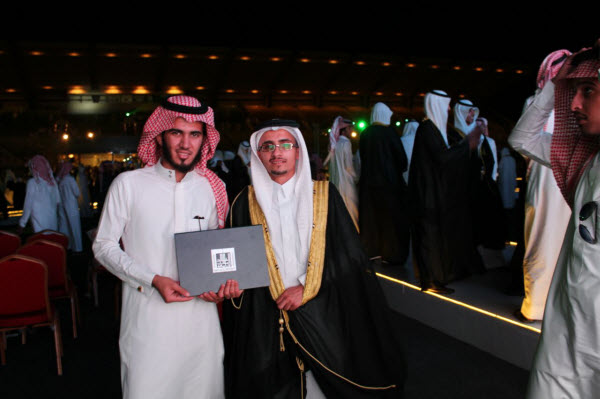 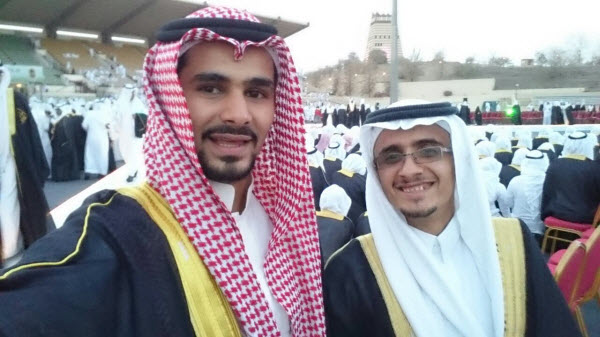 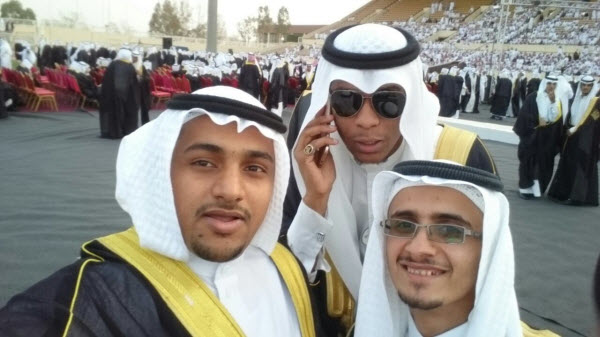 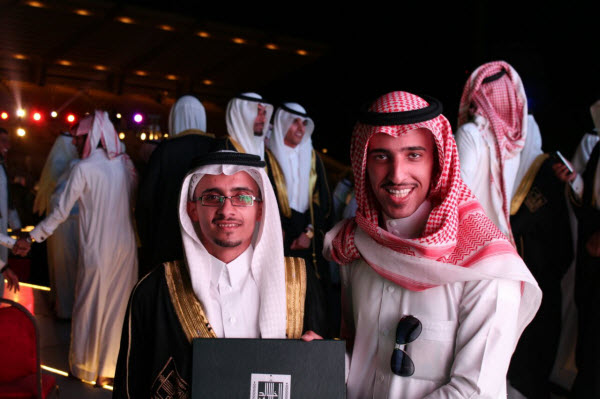 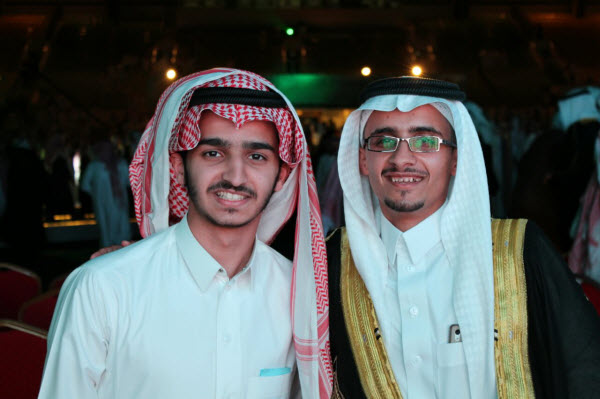 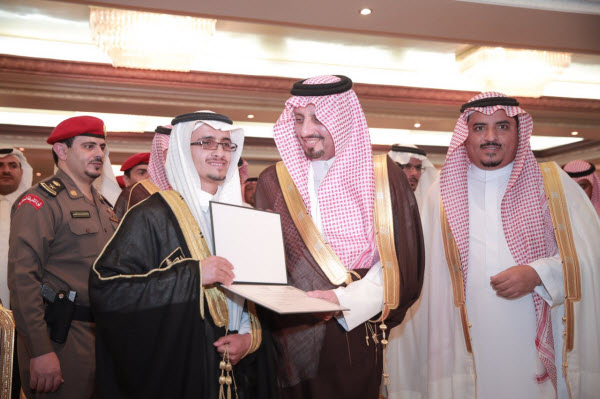 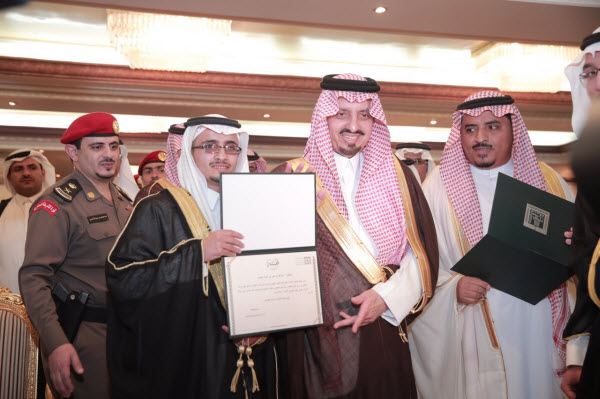 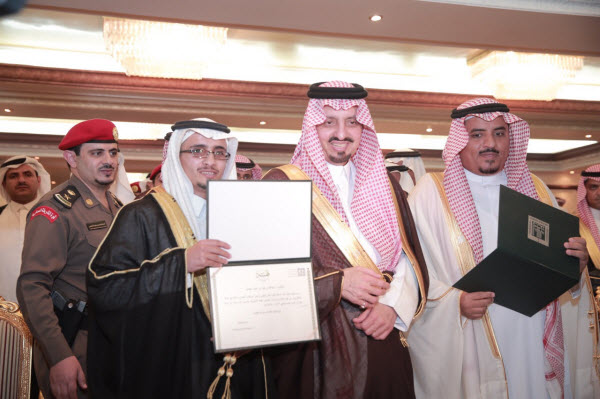 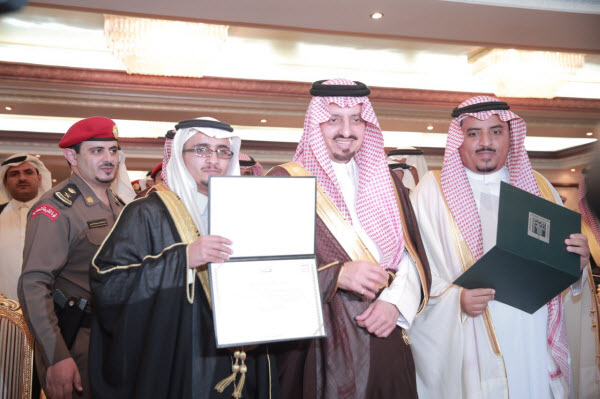 Ibrahim Al-Hilali, FLT Alumnus, received recognition from the Governor of Mohaiyl, His Excellency, Muhammad Bin Sabra and the President for Social Development, Dr. Hamza Al Fathahi. Additionally, the KKU excellence award was presented to Ibrahim for his outstanding contributions by His Excellency, University President, Professor Abdulrahman Al-Dawood. Ibrahim established the Afkaruna Foundation which is formed by successful young people who meet to talk and engage life and societal issues. The foundation also shares success stories to inspire others. The Afkaruna Foundation received a 20,000 SAR donation from the Governor of Mohaiyl. Congratulations Ibrahim! We are proud of your achievement! For more information on how to get involved with the Afkaruna Foundation, please use the contact details below. Ibrahim Al-Hilali, Afkaruna Foundation President Call 053-250-8475 or Email Ibrahimalhlali@gmail.com Date: Spring 2015  Source: Faculty of Languages and Translation
English
King Khalid University
Faculty of Languages and Translation
Alumni Unit
Bachelor of Arts in English Program 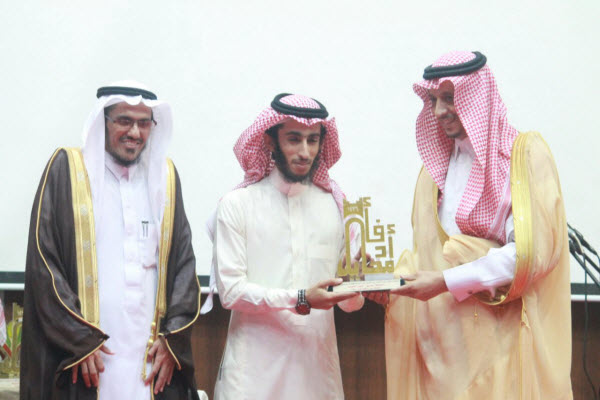 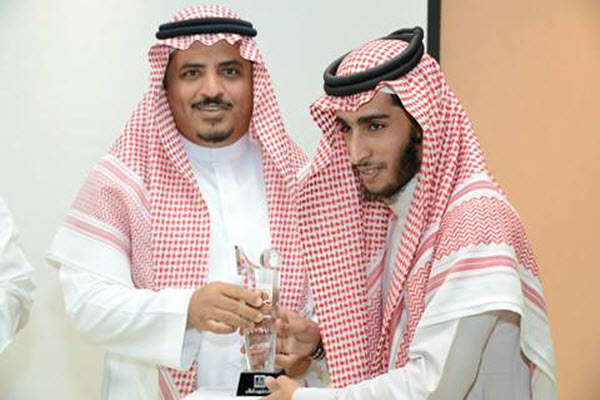