On April 18, 2018, the Language Research Center of King Khalid University organized a seminar that included two presentations – The Concept of Poetry: T. S. Eliot versus I. A. Richards by Dr. Manoj Kumar and Re-appropriating Magical Realism in Arabic Narratives by Dr. Mahmoud Radwan. Dr. Manoj’s presentation was based on his study that aimed at highlighting the contradictory opinions on the concept of poetry and how both are suitable and witty to two different readers. In the beginning, he talked about the etymology of the word ‘poetry.’ He stated that this word was derived from the Greek word ‘poiesis’ that means ‘making.’ He discussed in detail the overall concept of poetry. He focused on forms, genres, compositions, etc. Dr. Manoj explained Eliot’s classism and theories of impersonality, and later I.A. Richard’s theory of literary criticism and T.S Eliot. He also compared Eliot’s and Richard’s language of poetry. Dr. Manoj concluded that T.S. Eliot and I. A. Richards belong to the galaxy of critics who are also well known as poets. Dr. Mahmoud Radwan started his presentation by defining Magical Realism. The term, he said, had been coined by Franz Roh in 1925. It denotes, he added, crossing, overlapping and effacing borders between paradoxical codes and elements of realism and fantasy. Dr. Radwan explained the reason why writers embrace Magical Realism. He stated that marginalized native writers utilize Magical Realism as a mold through which they enter the literary mainstream to deconstruct dichotomous paradigms and projected images created by the advocates of the dominant culture, represent their repressed narratives, and recuperate lost and minor voices. Finally, he mentioned Arab writers who were inspired by Magical realism – Naguib Mahfouz, Ghairi Shalabi, Edwar Al-Kharrat, Emile Habibi, Ibrahim Al Kuni and Ghadah Al Samman and so on. Dr. Radwan concluded that re-appropriation of Magical Realism in Arab narratives emerges as an example of how in adopting such a mode, the act of writing becomes an act of survival, rescuing fragments of the Arab culture from oblivion, shedding light on history, tradition, and reality. The seminar was overall a great success. Date: 4/20/2018 Source: Mohammad Adil Siddique Multimedia Source: Dr. Iustin Sfariac and Dr. Mihaita​ Horezeanu
English
Language Research Center
Seminar
Presentation
Literature
Literary Criticism
Poetry
Magical Realism
Dichotomous Paradigms

The Faculty of Languages and Translation is pleased to announce the release of FLT Lecturer, Sharear Talukder's, Glimpse of Rhythm. This is the author's first published book of poetry, and it addresses a wide-range of subjects including but not limited to citizen rights, freedom, and social justice. "I decried the injustice of every manner but cried for a world full of hope and aspiration through my work," added Shahrear. He demonstrated his angst and anger in words. Candidly, this Glimpse of Rhythm is a Glimpse of Truth. You can contact the author by visiting his blog at https://shahrear.com/. Date: 9/17/2017 Source: FLT Media Center
English
Contemporaniety
Poetry
Social Justice 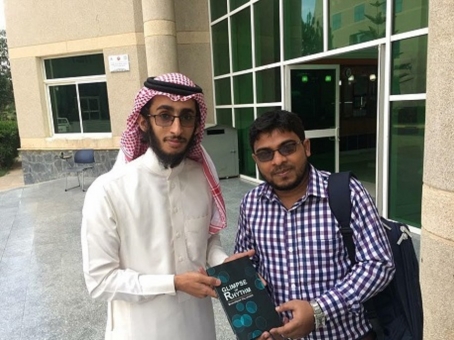 On Monday, March 27, 2017, the Language Research Centre, under the supervision of Dr. Ismail Al Refaai, held a seminar. Dr. Haseeb Ahmed talked about the importance of literature in English Language Teaching and Learning. His presentation was titled, What is Literature? Why Should we Study it? Dr. Ahmed emphasized the importance of studying literature. During his presentation, he quoted preeminent poets such as Shakespeare, Wordsworth, Sidney, and philosophers like Aristotle and Jean Paul to identify the purpose of literature. Some of them termed literature as a source of delight and pleasure, and some termed literature as a tool serving a political purpose.     Dr. Ahmed concluded that literature helps to express oneself, have access to culture, develop sophisticated sensibility, appreciate beauty, and develop a wider perspective of events. It is worth noting that Al Samer Campus also participated in the seminar through video conferencing. The presentation was worthwhile and engaged the participants on both sides with an interactive discussion.  Date: 03-27-2017 Source: MD Adil Multimedia Contribution: MD Sirajul Islam
English
Curriculum
English as a Second Language
Linguistics
Literature
Literary Criticism
Textual Criticism
Pedagogy
Poetry
Short Stories