Faculty of Languages and Translation 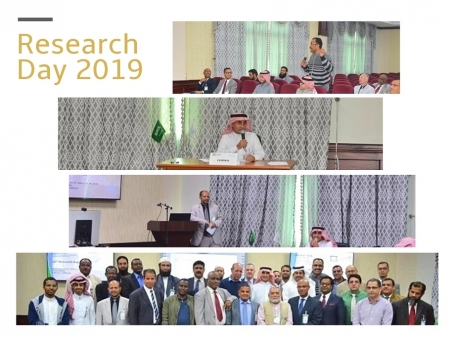 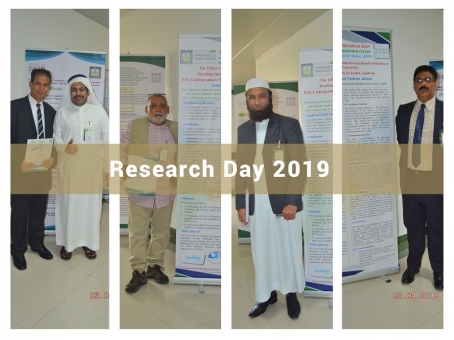 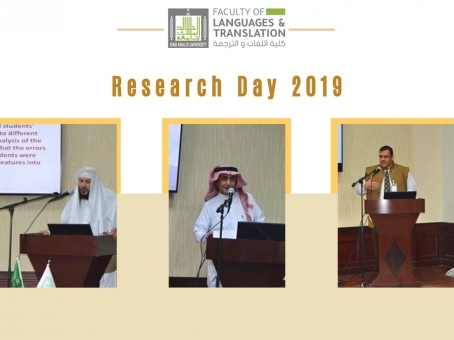 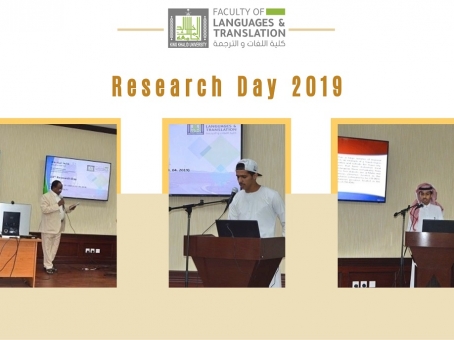 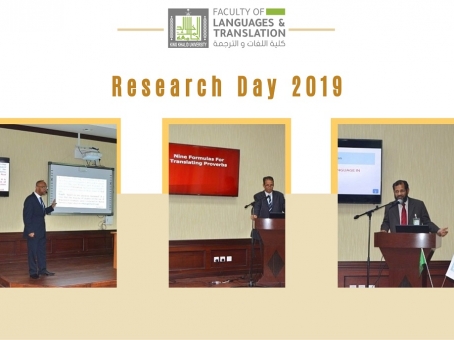 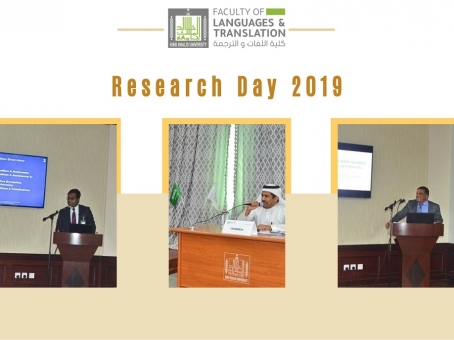 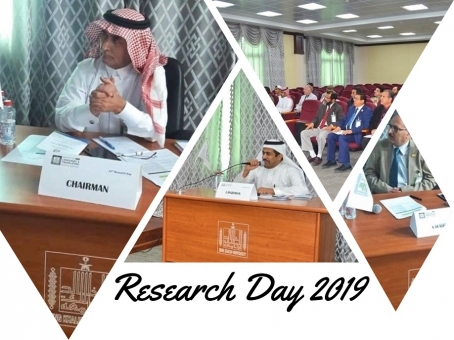 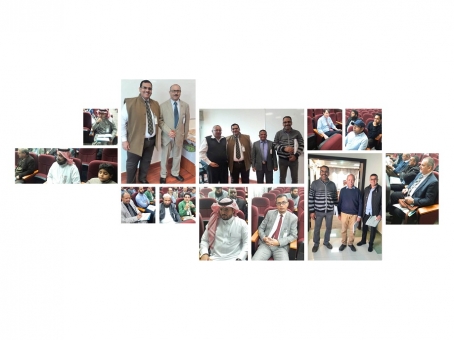 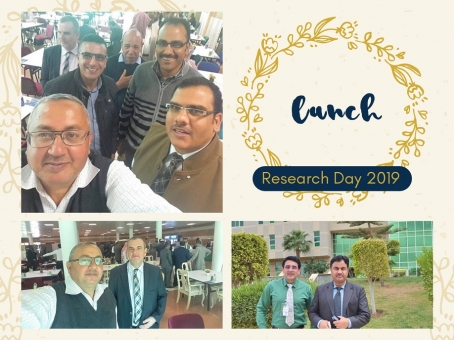 The Faculty of Languages & Translation (FLT) is partnering with the Asir Region Directorate of Education on community outreach initiatives. On March 31st, Habib Bin Zaid Elementary School in Abha hosted Dean, Dr. Abdullah Al-Melhi, and Dr. Eyhab Bader Eddin, MCIL, CL. Many of the students, along with some of their teachers and administrators, participated. The purpose of the program was to introduce the children to higher education and foreign language usage.   School Principal, Mr. Mohammed Farhan, first welcomed the FLT visitors to the enthusiastic crowd. After leading the students through a few linguistic exercises to pique their interest, Dean Al-Melhi and Dr. Bader Eddin transitioned their presentation into the fundamentals of translation. Of course, interpreting and translating are extremely complex disciplines that would be of little interest to most children. Undaunted, the FLT representatives simplified the concepts and broke down the process of translation into rudimentary components. Dean Al-Melhi and Dr. Bader Eddin used a 'down- to- earth' method, complete with simple examples that helped the students understand the need for and methods of translating. The simple and interesting method of introducing the topic came into fruition when face-to-face classroom interaction was observed.   Once the students were fully engaged, the FLT professors gave a brief PowerPoint presentation summarizing the importance, history, and methods of translation. They also showed the students the differences between simultaneous and consecutive interpretation. After reviewing the advantages and disadvantages of each method, the students voted on their preferred translation method.   Dean Melhi stated that, 'It is wonderful having the opportunity to reach out to young people. These grade school students represent unlimited potential, and the future of our nation. One day, some of them will definitely fill our shoes as professors, probably at the same faculty we are representing today, and they would bring back today's event. Vivid, sweet and warm or dim, distant and fading, their memory of today's fleeting visit will come flooding back in their memory. It is important to instill the desire for higher education and life-long learning at an early age. These cooperative outreach initiatives help inspire students, and present some of the career opportunities available to them as they mature'.   Dr. Bader Eddin echoed Dean Al-Melhi's sentiments in noting that keeping the Kingdom's youth engaged and hungry for learning is an absolute necessity. 'We want to show the children that universities are safe and welcoming places that help people learn more and do more in life. One abiding memory of mine dates back to childhood days back in Kuwait where I was sitting at a desk as a pupil. Evoking scenes from childhood days is retained for good with a delicate scent lingering in the air of memory', he added wallowing in a wave of nostalgia for childhood years. Dr. Bader Eddin then showed the students a series of short videos and multi-media presentations that reinforced the live lesson.   The Faculty of Languages and Translation is dedicated to community service and taking an active role in achieving educational and socioeconomic objectives at both the regional and national levels. Date: 4/1/2019 Source: Faculty of Languages and Translation
English
Faculty of Languages and Translation
General Directorate of Education in Asir
Community Service
Outreach
Habib Bin Zaid Elementary School

This past Sunday Dr. Mahmoud Radwan conducted a workshop titled 'Approaches to Literary Studies' for students of the Faculty of Languages and Translation. The English Club sponsored the event, and more than 200 students and faculty members attended.   The workshop covered a variety of topics. First, Dr. Radwan defined literature and distinguished literary works from other forms of writing. Next, he discussed the importance of creativity and imagination in developing literary writers. Dr. Radwan then reviewed the three major forms of literature (poetry, drama and prose), and the elements of literary works. Later he recounted the major historical developments in English literature.   Finally, Dr. Radwan discussed in detail the benefits of both reading and writing literature. Literature offers readers alternative perspectives and encourages critical thinking. Literary works from varying places and past times enhance readers' understanding of other people and cultures. Much of literature provides valuable insight into the human condition. It is worth noting that exposure to literature can greatly enhance a person's writing skills.   The workshop participants benefited greatly from Dr. Radwan's presentation. Many students were inspired to utilize their innate talents and capabilities to write literature of their own. While literature classes encourage student creativity, these special workshops reinforce classroom learning and enhance students' personal development. Students also received words of encouragement and examples of inspiration when Dr. Radwan referred to the most prominent figures in Arab literature. Examples of such writers include Nguib Mahfouz (Egyptian), Radwa Ashour (Egyptian), Ghazi Al Gosaibi (Saudi), Abdou Khal (Saudi), Abdelfattah Kilito (Moroccan), Ibrahim Al-Kuni (Libya), and Amir Tag Elsir (Sudan). The English Club is proud to sponsor this and other events for the student body. Each attendee at Dr. Radwan’s presentation will receive a certificate.   The FLT fully supports the creative literary arts. In a world increasingly focused on technology and technical prowess, people often overlook the inherent value in literature. The department is committed to preserving society's appreciation for great writing and contributing to the ever-expanding body of literary works. Date: 3/12/2019 Source: Faculty of Languages and Translation
English
Faculty of Languages and Translation
English Club
Approaches to Literary Studies
Literature
Workshop

The English Club recently sponsored a social gathering at the Al-Lasan Campus which was open to all students and faculty members. Student activities director Faisal Alfadhil explained that he planned the gathering to serve a variety of important purposes. First, the event was to strengthen the relationships between students and faculty members. Also, the gathering helped further develop positive relationships among the students, and encourage their participation in future departmental and university-wide activities. Third, the event provided students in the department an opportunity to practice English. 'It is beneficial for language learners to practice the target language in a natural, informal setting' said Director Alfadhil. Finally, the festivities allowed the students time to unwind after the mid-term exam period, and gave them a chance to have some collegial fun.   The evening was busy with many activities. First, there was a series of 5-on-5 football matches. After each match, the prevailing team retained the field to face a new challenger. The football competitions were friendly, but fierce. Every team performed well, and each player exhibited gentlemanly sportsmanship. After a short rest period, everyone prayed en masse.   Next, the Spelling Bee competition commenced to the great excitement of the participants and the audience. Seasoned teacher and word-master Hassan Costello directed the Spelling Bee, assisted by Director Alfadhil keeping score, and English Club President, Abdulaziz Dahlan, monitoring the timer. After several rounds of excellent performance, the first-place finish came down to a ‘sudden death spell-off’ between senior students Fawaz Al-Qahatani and Saud Al-Shahrani. Many of the words used in the competition contained reverse ordered, double vowels which are notoriously difficult to spell even for native English speakers.   After a lively exchange of spelling efforts, Fawaz ultimately prevailed taking first prize with Saud as a most worthy runner up. Vice Dean of Academic Affairs, Dr. Yahya Asiri, presented the Spelling Bee awards. The top finishers received 100 SAR and 50 SAR Jarir Bookstore gift certificates for first and second place respectively. Many of the students who watched the competition expressed interest in participating in future spelling bees.   After the Spelling Bee, the department hosted an open forum discussion. All students and faculty members were allowed and encouraged to raise issues about the FLT department operations. Everyone was free to discuss issues, problems, suggested improvements and the like. The purpose of the form was to get honest feedback from stakeholders. This is an essential component of the FLT's commitment to continuous improvement. Among the topics discussed was the need for greater informal student-teacher engagement. The consensus was that additional social gatherings would greatly help to advance the goal of reinforcing relationships.   Vice Dean Asiri, Chairman, Dr. Munassir Alhamami, Academic Development Unit Head, Dr. Abdulrahman Almosa, Academic Guidance and Counseling Unit Head, Dr. Dawood Mahdi, and Dr. Saeed Al-Surf all spoke to the students. While their remarks varied, the theme was the same. The faculty and staff are there to help the students succeed in their academic and subsequent careers. In his address to the students, Vice Dean Asiri eloquently summarized the faculty adjurations in saying:   'Educating the next generation of leaders is a critical duty. Helping all of you become consummate professionals and upstanding citizens is our mission. Our nation’s future depends upon your drive, abilities, and integrity. The college experience involves many challenges, hardships, and frustrations. We encourage you to embrace every difficulty as an essential part of learning and a building block for your ultimate success'.   The faculty expressed optimism about student attitudes towards education and their apparent eagerness to make the most of their time at the university.   After prayer, the attendees enjoyed a delicious meal. The dinner conversation was lively and convivial. The discussions continued well into the evening, and a fine time was had by all. This social gathering is indicative of FLT's commitment to the students and higher education. Date: 3/9/2019 Source: Faculty of Languages and Translation
English
Faculty of Languages and Translation
English Club
Student Activities