Associate Professor Michael Hadzantonis conducted a workshop on Linguistic Anthropological facets of language selection, which was organized by the Language Research Center of King Khalid University, on January 16, 2019. Here, the language of study was Greek, following a study and data collection in Athens, Greece in 2012.    The central premise of the study followed on from work by Duranti, which exposed that, in Italian, the act of dropping or including a subject pronoun constituent in/from any spoken construction, will alter the pragmatics of the sentence. In the Italian case, including the unnecessary subject pronoun will effect positive conceptions by speakers toward the referent. However, in the case of the Greek context, Hadzantonis argues that the opposite was found to be true. This metapragmatic conditioning of syntax aligns with work by Michael Silverstein in the 1980s, who discusses the importance of 'reference' in syntactic constituents, so to effect either deliberate or nondeliberate positioning of the subject referent, by the speaker.        This work constitutes the first part in introducing discourse analytic techniques in Linguistic Anthropology, and sits within a continual line of talks in the area of Research methods in Linguistic Anthropology, by Hadzantonis. Date: 1/30/2019 Source: Mohammad Adil Siddique
English
Faculty of Languages and Translation
LRC
Language Research Center
Linguistic Anthropology
Research Methods
Syntax
Pragmatics

The Language Research Center organized a seminar on December 06, 2017 that included a presentation by Dr. Emad Al-Tamari titled "Linguistics in Aid of Teachers of English." His presentation attempted to focus on how “fixing” and “developing” students’ linguistics competence will lead to improving students’ linguistic performance. His session began with some questions about whether our teachers have ever tried to assess their own English, whether they evaluate their students’ English and whether they have thought of linguistics as a tool to help improve their students’ English. Dr. Al-Tamari successfully pinpointed significant problem areas our students have, which he thought our teachers should focus on when teaching English. Dr. Al-Tamari, while defining linguistics, highlighted some pedagogical implications linguistics could have. He quoted Chomsky while focusing on the nature of language and how communication works. He explained Chomsky’s three models namely that of linguistic competence, performance, and language acquisition. Finally, he focused on major areas of linguistics such as phonetics, phonology, syntax, morphology, and semantics. Dr. Al-Tamari recommended that our teachers should assess their students’ English regularly. A teacher, he added, should be a role model for the students when it comes to language use.   The Al-Samer girls’ campus also participated in this seminar online. The presentation was worthwhile, interactive and overall a great success.  Date: 12/6/2017 Source: Mohammad Adil Siddique Multimedia Contribution: Mohammad Sherajul Islam
English
Langauge Research Center
Linguistic Competence
Linguistic Performance
Language Acquisition
Phonetics
Phonology
Syntax
Morphology
Semantics

The English Club in coordination with the Deanship of Student Affairs hosted a workshop titled “How to Improve Your English Communication Skills.” The event occurred on February 18, 2015, in Auditorium 6. It was a lively event that drew a crowd of nearly 500.  Hassan Costello, language instructor, covered different topic areas to include: Intrapersonal Communication Interpersonal Communication Small Group Communication Public Communication Costello: Practice will build your accuracy. Accuracy will build your confidence. Confidence will build your fluency. Be patient and make many mistakes. Those mistakes are incredibly valuable learning opportunities! Certificates will be distributed to all workshop attendees in the coming weeks. A vote of thanks goes to Dean Abdullah Al-Melhi for facilitating this event. In addition to all members of the English Club, further recognition goes to the following for making this event a success: Ibrahim Al-Asmari, director of student affairs Abdullah Al-Ahmari, student activities president Yusef Al-Shahrani, professional photographer Saeed Al-Ahmari, professional photographer Date: Spring 2015 Source: Faculty of Languages and Translation
English
Communication Skills
Discourse Analysis
EFL
ESL
TESOL
TEFL
Foreign
Learning Strategies
Second Language Instruction
Sentence Structure
Speech Competition
Syntax 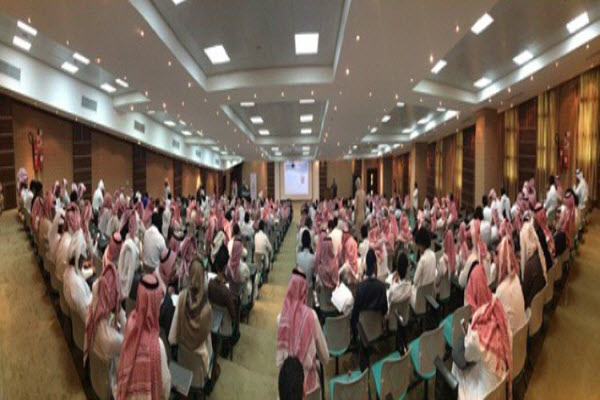