The First Annual Forum on the English language titled Teaching English in the 21st Century was held on April 15, 2017, at Saudi German Hospital in Abha, Saudi Arabia. The forum was organized under the supervision of Dean, Dr. Abdullah Al Melhi, in cooperation with Quality Education Holding Company and Oxford University Press. The aim of the forum was to train language teachers for professional development that would emphasize the enhancement of teaching competence regarding classroom management, activities, and handling overall language teaching. The program included two training sessions and four presentations on English Language Teaching (ELT). The participants included both male and female faculty members working at King Khalid University. The program began with a welcome speech by Dr. Abdullah Al Melhi.  In his speech, he emphasized the significant value of holding Forums which aim to advance the field of ELT. He reiterated such importance by focusing on the fact that forums of this nature always bring beneficial changes in language teaching and help to discuss new teaching concepts. He suggested there be more frequent language forums in the future for professional development. Terrie Craddock from Oxford University Press conducted two training sessions. In her first session, which was titled Motivating Students, she shared ideas about how to motivate language learners. During the session, the participants took part in an interactive discussion, where they exchanged their views on motivation. She highlighted different ways to make language tasks more interesting and engaging. Craddock’s second session, Differentiated Teaching and Learning, looked at dealing with groups of mixed abilities. Despite the challenges involved in handling diverse skill groups, she said, it is manageable if the teacher knows how to engage fast learners. She also highlighted the advantages and disadvantages of combining fast learners with slow ones. Overall, both the sessions were very interactive and informative.   What followed was Mohammad Adil’s presentation titled Exploitation and Adaptation in EFL Teaching. His presentation was based on a case study he had conducted on the usefulness of course materials used in skills and language courses. He pinpointed some issues associated with the use of published course materials. He emphasized that teacher’s creativity, control, and choice (McGrath 2013: 22-23) can make a difference.  He showed how a boring or monotonous lesson could be changed into an interesting and engaging one if the teacher uses his or her creativity. Adil concluded that it is illogical to believe that the course books are useless and at the same time, it is not logical either to depend strictly on published course books while teaching. In his session, the participants also exchanged their valuable thoughts. The next presenter was Dr. Eyhab Bader Eddin who spoke about Second Language Acquisition (SLA). His presentation titled Theoretical Approaches to Second Language Acquisition was primarily centered on theories about language learning and acquisition such as Krashen’s (1982) Monitor model, behaviorism, and innatism. During his session, he showed some funny movie clips to highlight challenges involved in language learning and acquisition. Dr. Eyhab, through these video clips, also wanted to highlight how a learner’s mother tongue influences second language learning. He concluded that SLA theories are closely related to their counterparts in the mother tongue. Also, prior knowledge of mother tongue, usually acquired from the parents, may or may not be an advantage depending on the similarities and differences between the pair languages in question. Dr. Abdul Wahed Al Zumor’s presentation was centered on his study based on challenges encountered by King Khalid University Science faculty students, as a result of English Medium Instruction (EMI). The study revealed that the identified approach results in a failure in that it deteriorates lecture comprehension, understanding content, and communication with their instructors due to lack of adequate English proficiency. Dr. Al Zumor concluded that the additive bilingualism approach could enrich their learning environment. This presentation was worthwhile in that it successfully raised awareness among the participants of the drawbacks of English Medium Instruction (EMI) in teaching courses other than English.    Mohammad Sirajul Islam concluded the sessions by presenting about issues related to the use of e-learning. This was also based on a case study that aimed at investigating students’ attitude towards e-learning. Interestingly, students enrolled in language courses showed a positive attitude towards online learning. On the other hand, content course students’ attitude towards e-learning was negative. He pinpointed another crucial issue related to teachers’ expertise in using Blackboard. Many teachers fail to follow the rubrics while designing online courses. He concluded that there is a need for proper e-learning training for teachers so that they can enhance their expertise in teaching online. In the end, there was a closing speech by Dr. Abdullah Al Melhi, who thanked the organizing committee for arranging such a program. He congratulated those who had worked behind the scenes to make the forum a real success.    We would like to recognize the following organizing committee members for their efforts in this event: Dr. Mwafaq Momani Mr. Javed Ahmed Mr. Mohsin Raza Khan Mr. MD Sirajul Islam Mr. Saleh Hokash Mr. Naser Alhawamdeh Mr. Mazharul Islam     Date: 04-17-2017 Source: MD Adil Multimedia Contribution: MD Sirajul Islam
عربية
Academic Standards and Assessment
Classroom Activities
Classroom Organization
Current Policy Trends
Curriculum Design
English Language Development
English Language Learners
Faculty of Languages and Translation
King Khalid University
Literacy Traditions
Lesson Plans
Oxford University Press
Pedagogical Content Knowledge
QEHC
Quality Indicators
Sociolinguistic Interactions
Teacher Training and Professional Development
Technology & New Learning Tools
Transformative Learning 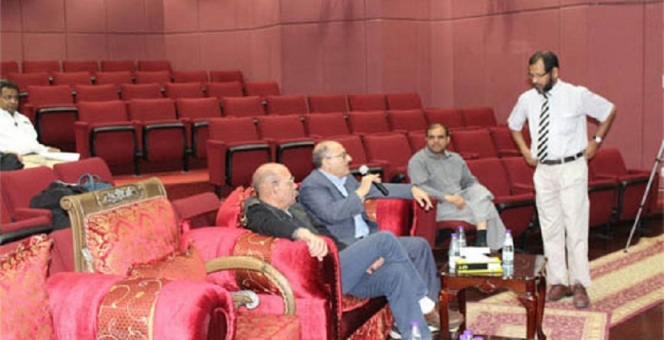