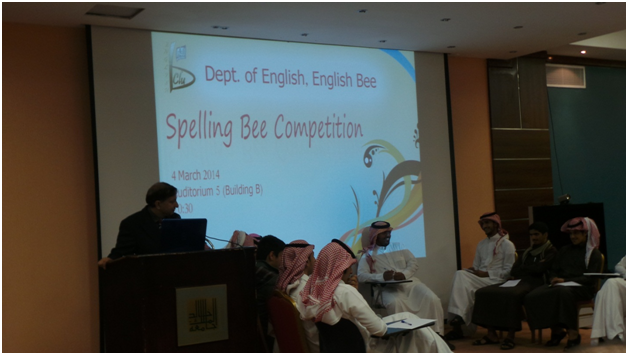 For the consecutive second time in this 2013-2014 academic year auditorium five (5) was resonated with the clapping of a huge audience. It was 4 March 2014 when fifteen spellers from the Department of English gathered in the big hall room to prove themselves as the best.

Honorable Dean of the Faculty of Languages and Translation, Dr. Abdullah Al Melhi graced the occasion as the chief guest. Among others Vice Dean of Quality and Development Dr. Abdulkhaleq Al-Qahtani, Director of English Club Dr. Sayed As Sarf, faculty members and students from different colleges were present to witness young spellers zeal for spelling.

Tareq Ali Humaidi of level 1 from English Department won the spelling bee battle on Tuesday. His winning word was 'Spectacular'.

Professor Dr. Golam Faruk, organizer of this magnificent Spelling Bee Competition said, "These kind of spelling contests act as a kind of fine-tuning ground for the students who want to improve themselves in academic arena.”  He expressed his gratitude to the writing course teachers Mr. Siraj, coordinator writing-1, Mr. Joseph, Dr. Osman, , Mr. Matthew Paul, and Mr. Hassan Costello for their constant support in preparing the young spellers.

Dr. Soren, Mr. Siraj, Mr. Matthew Paul, and  Mr. Hassan Costello from the Faculty of Languages and Translation were the judges of this spelling competition. Mr. Hassan Costello  and Dr. Soren articulated words in American and British pronunciation respectively.

Except some initial acoustic problem, but fixed immediately, the battle went on quite smoothly. All the contestants along with the three winners were rewarded for their active participation in this Spelling Bee Competition.

How to Prepare an Oral Research Presentation

How to Prepare an Oral Research Presentation
On October 12, 2021, the Scientific Research Unit - Women’s section- organized a webinar titled How to Prepare an Oral Research Presentation by Dr. Nada Alqarni.   Dr. Alqarni started her presentation by guiding her audience to think about their target. “Think about what you want to achieve and think about how you are going to involve your audience in the presentation”, said Dr. Alqarni. She then illustrated the significance of brainstorming the main ideas, organizing the topics of discussion, getting ready for the presentation and rehearsal.   Dr. Alqarni indicated that it is important to capture the listener’s attention in the beginning. Then the presenter should state the purpose of the topic of discussion and present an outline of his/her work. Dr. Alqarni highlighted the importance of presenting the main points one by one in a logical order and making it clear when moving to another point. She indicated that using clear examples to illustrate the key findings is helpful to keep the audience involved in the discussion. In addition, she referred to the use of visual aids to make the presentation more interesting.   The webinar focused on five main points. These are: preparing an oral presentation, organizing the content, typical presentation format for research projects, delivering a presentation, and a summary of all the main ideas of discussion. In the end, Dr. Alqarni presented a video where an oral research presentation is delivered, and she explained its points of strengths and weaknesses. The presentation was followed by a discussion on presenting research projects that were nicely and neatly wrapped.   The webinar, which was mainly delivered to MA and Ph.D. students and attended by staff members from different faculties at the university, was really informative. Date: 10/18/2021 Source: Dr. Amal Metwally - Head of Scientific Research Committee

FLT E-Learning Supervisor Delivers Several University-Wide Workshops
In October 2021, E-Learning Supervisor, Mohsin Raza Khan, delivered an e-learning practitioner certification course open to all faculty members. The importance of instructional design training and an enhanced learning environment for students is well known to all colleges of the university. "The two-week practitioner course is part of a university-wide strategy to provide the knowledge and skills needed to capitalize on one of the fastest-growing areas of education while creating captivating learning experiences for students. Around 60 faculty members participated, and we really focused on how to leverage some of the tools that can be used to increase social interaction, which is often missing in an online or remote environment," said Khan.   The primary objectives of the course were to improve student learning, engagement, interaction, and quality learning. These objectives were solidified by the core foundation of the program that participants would be able to:   Create content items to present a variety of learning activities to enhance student learning. Deliver authentic assessments to evaluate student knowledge in a variety of meaningful ways. Use Blackboard communication tools to promote interactions between the student and instructor, the student and course content, and the student and peers. Effectively utilize Blackboard Collaborate™ tools to increase student engagement by providing a means to share and create knowledge.   Of noteworthy mention, in March 2021 and concurrently with the e-learning practitioner course in October 2021, Mr. Khan also delivered the Applying the QM Rubric workshop (APPQMR), which is offered by the Deanship of E-Learning in partnership with QM. "Dozens of workshop participants successfully completed 10 modules. They learned more about the QM rubric and annotations. We really focused on the importance of having measurable course and module objectives." Director of Instructional Design, Abdullah Zubain, said: "The APPQMR course is also a prerequisite for anyone looking to obtain the QM peer reviewer certification. I thank Mohsin, our women's campus QM coordinator, Safa Al-Shehri, and our training manager, Ali Alaosi."   The Bachelor of Arts in English program is expanding its educational resources to serve more members of the community and is committed to continuous improvement in all academic programs. E-learning is a vital component of both objectives and a vital tool for educational development at the university and other educational institutions throughout the Kingdom. Date: 10/14/2021 Source: Faculty of Languages and Translation

From Pedagogy to Andragogy in Post COVID-19 ESP Courses: A Customized Blended Learning Model for English in Medicine at a Saudi University

From Pedagogy to Andragogy in Post COVID-19 ESP Courses: A Customized Blended Learning Model for English in Medicine at a Saudi University
Ms. Amatul Hafeez Alvi presented her research paper she had previously presented at the 1st AEJ UKI SLA Research International Conference that aimed at bringing together English language professionals from around the world to share, learn, and further the English language. Her research was titled "From Pedagogy to Andragogy in Post COVID-19 ESP Courses: A Customized Blended Learning Model for English in Medicine at a Saudi University", and was presented at a webinar organized by the Language Research Center on October 11, 2021.   Alvi began the session by talking about a customized blended learning model for teaching English in Medicine at King Khalid University. In her research, she mentioned, she had tried to address the challenges which COVID-19 posed when teaching a subject like this. She shared her experience as she had done at the conference.   Alvi highlighted how COVID-19 affects health, the public, the entire society and most importantly the education system worldwide. Many countries around the world dramatically changed their policy with regard to education to ensure the proper safety of the people involved, she added.   Alvi emphasized that the education sector was so immensely disturbed that the attendance to universities, colleges, and schools was suspended almost globally. According to statistical data in 2021 from UNESCO, more than 94% of students around the globe were affected by this pandemic. She mentioned Saudi Arabia as one of the success stories in the world when it comes to coping with the impact of COVID-19 in the education sector.   Alvi pinpointed the fact that some courses were affected severely due to this pandemic. English for specific purposes (ESP), which has an "oriented focus", is one of those affected as face-to-face mode would be more effective. Such ESP courses, she added, are completely different from EFL and ESL courses in that they primarily focus on language in context. In ESP, the learners' knowledge of English reflects directly on their profession. Her research focused on English in Medicine. In the case of ESP, she added, they actually concentrated on the transfer from Pedagogy to Andragogy, the latter of which is more learner-centered.   Alvi concluded that we need to explore more methodologies and approaches to make ESP more effective.   The webinar was very interactive and a great success with the active participation of both male and female faculty members. Date: 10/14/2021 Source: Mohammad Adil Siddique

Top Students Honed Language Skills in First Online Summer Program
Under the supervision of Dean Abdullah Al-Melhi, the 2021 Online Summer Language Program (OSLP) titled "English Across Cultures and Intercultural Awareness" ended on 19 August 2021. OSLP is a four-week, intensive program in language study designed specifically for the curriculum in applied linguistics taught with a focus on intercultural awareness and different models of teaching and learning English. OSLP, much like our summer language program at Swansea University in 2019, was designed as an in-person, intensive language program, but due to the COVID-19 pandemic, OSLP ran synchronously online for the first time.   The OSLP team, led by Vice Dean for Academic Development & Quality, Dr. Abdulrahman Almosa, Chairman, Dr. Munassir Alhamami, and E-Learning Supervisor, Mohsin Raza Khan, sprung into action to co-develop — along with the team at Monash University — a fully online four-week summer language program for 63 of the best and brightest male and female students students in the Bachelor of Arts in English program.   Dr. Almosa noted, "This was the first time we held an online summer language program in cooperation with a leading international university. There were several technological and pedagogical challenges in developing an effective program that incorporates a social and cultural immersion experience that our students would get in person. Most of the modules were designed around language and culture concepts and instructional design, which are at the heart of recent developments in applied linguistics and related fields. I am pleased to report that our program was a success and among the first of its kind in the Kingdom of Saudi Arabia. I sincerely thank Dr. Nizar Farjou, Dr. Raqib Chowdhury, Dr. Ruth Fielding, Susan Davis, Dr. Anna Podorova, Dr. Libby Tudball, Dr. Melissa Barnes, Dr. Dat Bao, Dr. Amber McLeod, and Ouahiba Zarzi at Monash University for their diligent collaboration and effort to make our joint program successful."   In his closing remarks, Dean Al-Melhi congratulated the students involved in the joint program and expressed his appreciation to all participating faculty members at Monash University and the Faculty of Languages and Translation at King Khalid University. The Bachelor of Arts in English program is committed to providing students with additional activities for their professional development, consistent with the intended learning outcomes and labor market developments. Date: 9/3/2021 Source: Faculty of Languages and Translation